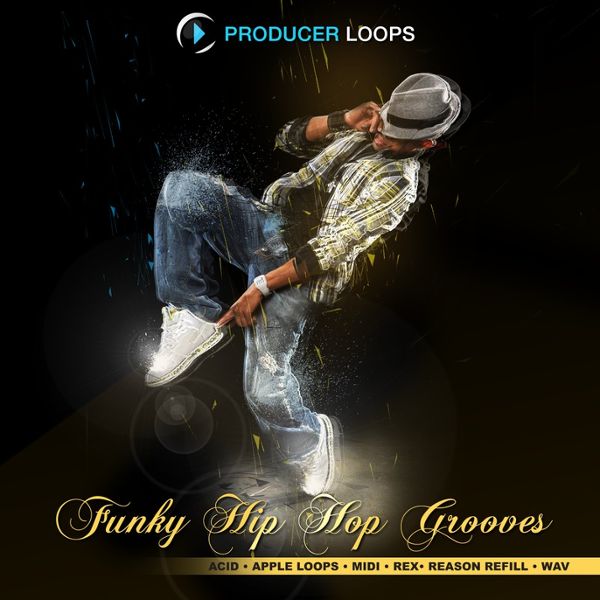 With over 2.7GB of content and 1,492 files (per format) and 324 MIDI files for professional producers, this is arguably one of the highest quality urban packs ever released!

Using the colossal content in this product you can create a multitude of styles from modern Hip Hop and Pop to 1980's style Electro Hip Hop, Funk and Nu Jack.

With over 2.7 GB of content (per format) and 1,492 files you'll be sure to knock out multiple hits in no time.

'Funky Hip Hop Grooves' serves up some of the highest quality urban material ever assembled and, as you’ve come to expect from Producer Loops’ products, wet and dry loops and MIDI files are provided for ultimate flexibility.

These kits are phat, fresh-sounding, and raw, combining old skool nostalgia with a funky modern edge in the inimitable style of internationally renowned artist and DJ, Khalid Filali (aka DJ Khalid).

Khalid’s latest endeavours include a collaboration with Supalife Records to produce a stunning collection of urban sample packs exclusively for the "Producer Loops" label, so you can expect to see a whole lot more ultra high-quality hip hop grooves in the near future.

As with all Producer Loops products, the files in this pack include tempo and key information in the filename (as well as embedded within the format) so you can see them at a glance.

This is very useful for fast integration with your existing projects.

For producers demanding MIDI loops, we've got you covered! 'Funky Hip Hop Grooves' includes 324 MIDI files (across all kits) that will give you access to the raw musical data, allowing you to assign your favourite drum and synth sounds to them.

Certain loops include 'Release' or 'Unlooped' versions of the loops, allowing you to end a sustained or heavily effected musical phrases with ease.

Dry versions are also provided so you can add your own FX, as required.

Over 150 outstanding one-shot samples are included (across all five kits) featuring both drum and synth samples, allowing you to create your own sampler patches to use alongside the included musical content.