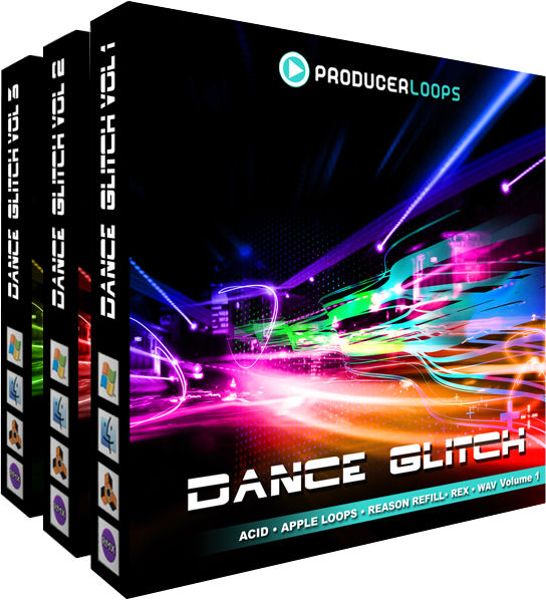 combines this hugely versatile series of lo-fi loops into one amazing bundle. Designed especially with producers of Dance, Glitch, Electro and IDM in mind, this must-have product contains over 2,400 individual loops supplied in multiple formats.

Producer Jeff Rhodes created this popular series using some of the same production techniques employed in our acclaimedseries, 'Dance Glitch Bundle (Vols 1-3)' presents you with thousands of small, but useable, building blocks suitable for a wide range of electronic music.

The range of sounds in this awesome bundle pack encompasses conventional electronic sounds as well as more experimental and niche textures.

This product includes loops that will work within the following genres: Dance, Glitch, Electro, Tech House, Trip Hop, Dubstep, Drum and Bass, Grime, Industrial, Techno, and more. All files are key and tempo tagged for ease of use in your projects.

About the MP3 Demos:

Demo 1 contains bass/synth sounds that are not in the collections, but ALL the beats/percussion sounds are from DG Vol 1-3.

This demo has been created to show the diversity of the drum loops in this product.

Each volume of Dance Glitch has about 2/3 beats & percussion, and all at the right tempo for dubstep (125-140). Contrastingly, Demos 2 and 3 only feature loops that are included in the product.

WELL, they say 'all roads lead to Rome' but here is another case of 'all Rhodes lead to fun'. Top producer Jeff Rhodes is back with another banging volume of Dance Glitch material which will have you crafting your next hit in no time. If you're a fan of dance, glitch, electro and 'intelligent dance music', otherwise known as IDM, then you need look no further.

Glitch has always touched on the weird and wacky end of things but always packs that surprise punch. This is good because listeners are always wondering just 'what comes next?' Jeff has pulled out all the stops again with loop names such as JustinTime, KissMeAcid, KrispySynth to name but three - great to see a sense of humour, too.

Of course the quality and variety is just as good asand you'll easily spend a good couple of hours trying and testing the musical treats that await you. AND what a bargain! For just under 15 notes you will proudly be the owner of more than 800 loops/samples A deal not to be sniffed at in this day and age.

The loops range from 120BPM to 140BPM and are all key/tempo marked so there's no faffing about trying to work things out. Dance Glitch 2 does exactly what it says on the tin... simple! ...Roll on Volume Three...!

Jeff Rhodes has been working as a professional sound designer and soundtrack producer for over a decade now. He is particularly well-known for his three "Pro Sessions" loop libraries that were released through M-Audio.

He has also released another six products independently with Todd Milne, with whom he co-founded Perimeter Sound Arts.

Constantly looking to change his style/sound without losing the defining elements.

Jeff has found working in audio to be an endless journey of discovery.